I may have stayed up a little too late last night, so I was a bit tired today. Ate breakfast fast alone (Fergus was more organised than me), then quickly got into my dress and headed downstairs. I was about five minutes late, so I had to walk in while the speeches were happening (bad look). Fergus was already there, but neither of the French (our first game of the day) were there till twenty minutes later, so I felt a little better. During the speeches, they told us the female judge from the last twenty-odd years had passed away a month earlier. She was lovely. I never really talked to her but she was such a recognisable face of the tournament.

The first game, against the French, I thought we might have been able to win, but we both made maybe six mistakes apiece which were too big to come back from. Lunch today was worse. By the time we played Slovakia I was tired (the Slovakian man was late, out smoking), but by the time we played Finland my brain was shattered! The Finns were really nice to play against. We’d chatted to them at the party last night, so it was lovely to play against them. We had no real chance against either the Slovakians or the Finns, they were both very strong. It was bloody cold during the Finnish game though! She asked for his jacket partway through, and Fergus, like twenty moves later, decided he should also be chivalrous and offered me his jacket. I didn’t take it, but it was quite cold. 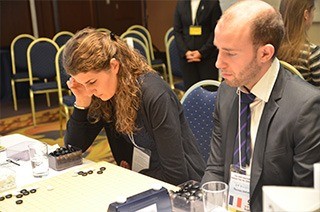 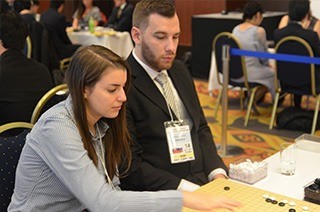 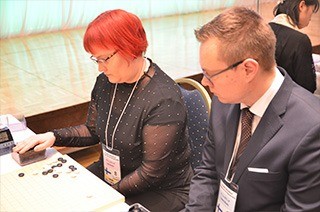 And that’s pretty much the day? I didn’t go to the party, my brain was fried. I kinda just went to sleep.

Posted by boredgoldfish 01:31 Archived in Japan