We've finally come to the business end (business middle?) of the holiday. Finally met Fergus over breakfast! He was very tall, moustached, and good company. We had a lovely chat. Then back to the room to shower and get dressed. There was a moment of frantic armpit shaving when I realised how unkempt it was. Down in the lobby before heading in, I felt a little overdressed. Most women were in blazers and trousers, not dresses. Fergus dressed up quite smartly (it was his wedding suit). We had our photo taken then went in to sit down.

When we saw we had to play a Japanese pair first, our hopes were very low. They stayed low as we lost. Midway through the game, Shinobu from go club showed up! He watched and took some photos, so some might get emailed to me, you never know. 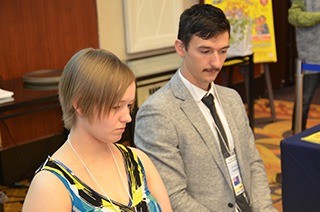 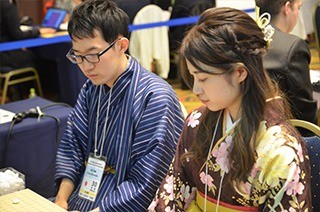 We eventually resigned. Afterwards we had bento boxes (lunch boxes) and stayed at the go table to chat. They were in gorgeous traditional outfits they had hired. They were really lovely to chat to, as they spoke quite good English. She was studying to become an engineer and he was becoming a doctor. Shinobu told me he had to go, but we arranged to meet for dinner at 5pm on Monday. He had bought dad a present of sake and me a present of chocolates, which was very thoughtful of him. The bento boxes were pretty dire for me. White rice was good, as was the breaded chicken. Couldn't do the rest though, but I got something inside me.

Second game was against the Guatemalan pair, who were brother and sister. She and I kept kicking each other under the table by mistake during the game. We actually won the game by resignation, which felt really good! 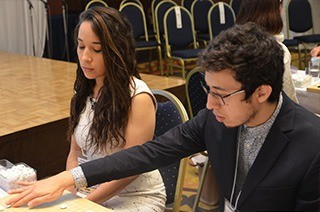 The Argentinian coach helped us with the review and gave us some very nice pointers (lesson: you can't always kill everything, and yes it would be great, but just because it worked this time doesn't mean it'll work again). Post game, it was time for us to get into our national costumes. Fergus and I timed it nicely so we went down together. 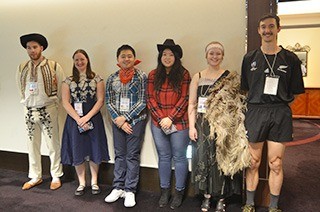 The goodwill game went well I thought. I played with a professional ("big dawg!" -Fergus), and against a pair of a small Japanese girl and the Thai student boy. She was very strong, and her Thai pair was alright. Thank goodness for translators being available, we could actually communicate after the game! The professional gave the other three of us fans, which was very kind of him. Next time I definitely should bring presents for the people I play. 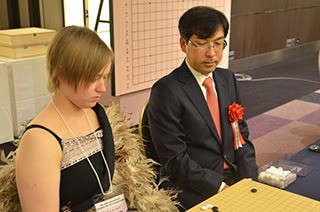 The big dawg himself + me

Party time! Now, these parties I reckon are the worst part of the whole weekend. Constant announcements and speeches, no chairs, terrible food, feel bad if you're talking but feel bored if you're listening. And it just keeps going. And your feet are in pain because you picked bad shoes. After I saw someone wearing crocs, however, I realised it really didn't matter. So I went shoeless, and god my feet have never felt so free. Had a nice chat to the other pairs, got some orange juice, had a good time. Dinner looked terrible.

The only thing that went wrong with my shoe-less plan: the lady in charge of picking the best dressed pair spotted me, and my lack of shoes. Nothing bad happened, but I think it was definitely Noted. "No shoes?" she asked. I didn't know what to say, so I just said "no". She then stared at me, touched my cloak, asked "where is your partner?" in a very abrubt fashion. Now, earlier in my emails, the organisers had asked if anyone wanted to sing for Mr and Mrs Taki's 30th anniversary (the inventor of pair go and his wife). I had said no but Fergus had said yes, so he was occupied, about to go onstage to sing. I pointed him out, and all she said was "yes, I see." So, my hopes were not high. The singing was... abysmal. It was the classic Pair Go Song, but there were like 15 people singing and they were all miked at different levels and with dramatically differently singing abilities. There were also only like four women, so for the parts were only women sang it was... dire. Fergus held a tune alright though. 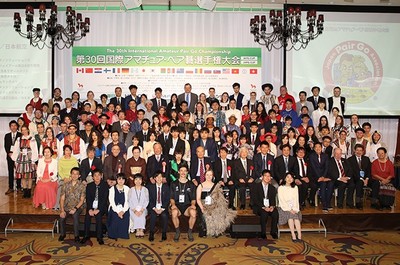 After the party, some pairs were wanting to go to a bar and sing karaoke. Fergus and I thought we'd be wild and tag along. I grabbed dinner from the convenience store while we were waiting for them. Karaoke ended up being about $60, so Fergus and I bailed. Martin, the head of the European Go Federation, offered to pay for me, but I declined as it would be pretty wasted on me (I'm not a fan of singing or drinking!). Fergus was a fan of sleep, so I just headed back to my room and relaxed until I fell asleep.

Posted by boredgoldfish 00:46 Archived in Japan